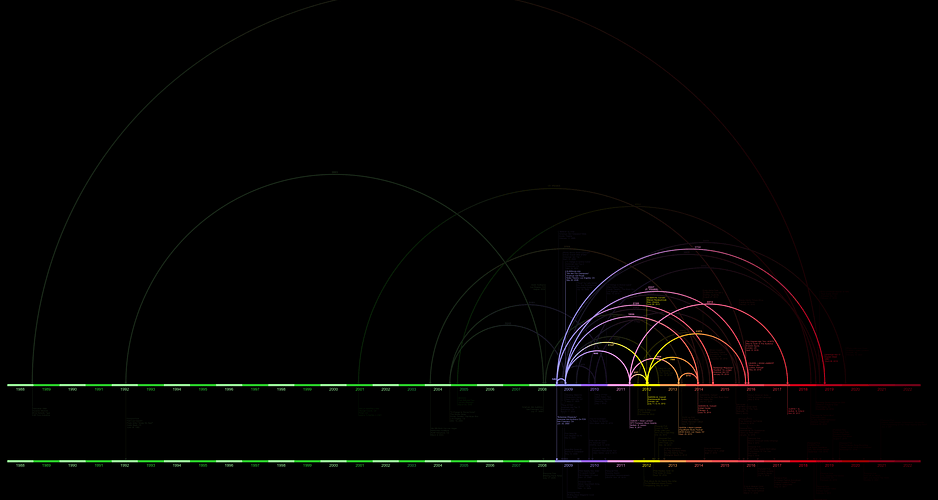 In Their Own Words...

Back To Idol As QUEEN Frontman

Exactly 3750 days after the broadcast of his audition with Bohemian Rhapsody on January 20, 2009 on FOX, Adam returned to American Idol on April 28, 2019, this time on the ABC network, to mentor the top 8 contestants for the Season 17's QUEEN theme night.

The ABC network also scheduled "The Show Must Go On - The QUEEN + Adam Lambert Story" - a two hours documentary - for the following night, April 29, 2019. A slightly edited version was released on Netflix on October 11, 2019.

According to Brian May, after that performance the phone was ringing off the hook with invitations for a tour. This eventually led to the first QUEEN + Adam Lambert US tour in 2014 which premiered in the United Center in Chicago, IL on June 19 2014:

It took 2212 days from the first appearance of QUEEN + Adam Lambert at the MTV European Music Awards in Belfast on November 6, 2011 for the band to return to Northern Ireland for a proper concert. It took place on November 26, 2017 and "raised the roof off the SSA Arena" according to the Belfast Telegraph.

An alternative edit of the audition including segments from both songs was shown as part of a behind the scenes interview with Adam on American Idol EXTRA:

Fred Bronson: Could you ever have imagined while auditioning with “Bohemian Rhapsody” that a few months later you’d be on stage singing lead vocals with Queen?

Adam: Weird. It’s weird full circle stuff all around. It’s thrilling, but it almost loses its impact in a funny way, like, “Oh, of course I’m onstage with Queen.” What the hell’s going on? “Of course, KISS.” I can’t believe it. This can sound very pretentious if taken the wrong way but I almost feel like I’ve been preparing for this my whole life. I do feel this is what I’m supposed to be doing and I have a fatalistic view on life that things happen for a reason. I feel like everything that’s led up to this point has prepared me for this. It’s the whole “Slumdog Millionaire” thing, where it’s like his whole life like leads up to that moment and the only way he gets through that moment is because of all of his experiences. I went to see “Slumdog” as this was all happening and I was just in tears because I was so touched by the concept of that movie. And I wouldn’t have done what I did on the show had it not been for what I’ve gone through and my experiences in my life and what age I’m at. I wouldn’t have been that confident. I would have been second guessing myself. I would have been really busy people-pleasing as opposed to just doing what I do. It was meant to be now.

This was the moment the general public saw Adam Lambert for the first time on their TV screens. It also led to a whole avalanche of Full Circle Moments starting with a "Mama..." and still going on in the form of QUEEN + Adam Lambert world tours.

The actual judges audition was recorded earlier, on July 17, 2008, but we will count the official broadcast date January 20, 2009 as the start of this arc (as an added piece of synchronicity, the day of Barack Obama's first inauguration). At the audition, Adam first performed Michael Jackson's "Rock With You". The song was not included in the official broadcast, except for a small snippet of Paula Abdul "rocking with him" - completely not in sync with what was being played on the program.

The judges were confused by his first choice (Adam has stated many times he has always been influenced by, and a fan of Michael and Madonna). According to the recent interview during NPR's "Ask Me Another" show, "I was like, 'Well, I can do anything you want! What else do you want, what do you wanna hear?" He went with "Bohemian Rhapsody" by QUEEN. "A light bulb, I could see it go off on the top of all their heads."

Here is the audition as broadcast on FOX:

The rest is (QUEEN) history.

Just 120 days later, on May 20 2009, Adam performed at the Idol finale in the Nokia Theatre together with finalist and eventual winner Kris Allen. The song was "We Are The Champions", and the backing band was QUEEN's Brian May and Roger Taylor!

In interviews, Brian and Roger recalled getting calls and emails from friends to check out this guy on American Idol singing "Bohemian Rhapsody". One of those emails apparently came from Spike Edney, long-term touring QUEEN keyboard player and current musical director. So when an invitation came to perform with the finalists, both were all game.

236 days after the EMAs, on June 30, 2012, QUEEN + Adam Lambert performed a free AIDS benefits concert in front of over 250,000 at Maidan Nezalezhnosti in Kiev, Ukraine. It was part of the Euro 2012 football (that's "soccer" for US readers) championship cultural program. The opening act was a fellow called Sir Elton John.

According to Adam, the band rehearsed for only 9 days to prepare for the two-hours long show. He was visibly nervous...

Brian May and Roger Taylor had tried to organize a concert in the UK as part of the Sonisphere rock festival in Knebworth, the location of the last QUEEN concert with Freddie Mercury. However, the festival was eventually cancelled for economic reasons, and QUEEN booked the Hammersmith Apollo (former Hammersmith Odeon, now Eventim Apollo) for two nights, eventually extended to 3 nights due to high demand (July 11, 12 and 14, 2012). In addition, two other concerts - one in the Olimpiyskiy stadium in Moscow, Russia on July 3, 2012, and another in the Stadion Miejski in Wroclaw Poland on July 7, 2012 - were added to the mini tour, resulting in 6 dates in total.

Many assumed this was a one-off occasion. But on September 20, 2013, 683 days after their first appearance at the EMAs, QUEEN + Adam Lambert performed at the otherwise pop-oriented iHeartRadio Music Festival at the MGM Grand in Las Vegas, NV and stole the show.

Compare the two previous videos with the one below to see a change in confidence. In Adam's words, "Someting just clicked!"